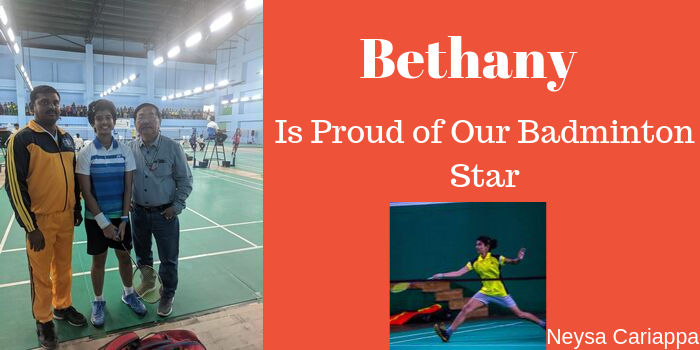 Discipline, hard work, perseverance and dedication has helped Neysa Cariappa in her pursuit to excel in competitive badminton. Neysa, who turns 14 years in December, was introduced to Badminton at the age of 8 years as a fitness activity. After a year of training under Mr. B.N. Sudharkar, she started playing state ranking and school tournaments for fun. Soon, she stepped into the world of active badminton with a lot of passion and started playing National and State Ranking tournaments. Since, the last three years she has been representing Karnataka State at the National Championship. Neysa Cariappa has been the top seed in Under 10 Girls Singles, Under 13 Girls Singles and presently in Under 15 Girls Singles in Karnataka State. Though Doubles is not her favourite choice but has been playing and has won couple of matches in the recent past, with her doubles Partner, Ashitha Singh of DPS.

Neysa is a proud student of Bethany High studying in 8th grade. This month Neysa along with four other girls from different ICSE Schools represented Karnataka State at the CISCE School Sports and Games – National Badminton Selection tournament, held at Padukone-Dravid Centre for Sports Excellence, Bangalore and won the Under 17 Girls team event. She also participated and won Singles and Doubles events in Under 17 Girls. She has been selected to participate at the School Games Federation of India to be held at Chindawada District in Madhya Pradesh next month.

It’s not just badminton she pursues with passion and hard work but also academics. Neysa has tried to balance both badminton and studies. Her day starts as early as 5 a.m., when she leaves to Kanteerava Stadium for fitness under the watchful eyes of her fitness coach, Mr. V.R.Beedu, a Dronacharya awardee. Mr. Beedu has trained many international athletes such as Anup Sridhar, Aparna Popat, Parupalli Kashyap and Reeth Abraham. She trains for two hours for endurance including strengthening and conditioning. Post fitness she barely has half an hour to get ready for school.

After school, she heads straight for her training session with her coaches, Mr. Irshad Khan and Mr. Prakash Rathod at Koramangala Club, which ends at 5 p.m. She enjoys her training as she does different kinds of training every day which makes it interesting. After the session, she gets an hour or so to complete her homework. The next session starts at 6.15 p.m. and goes on till 7.30 p.m. She returns home with barely any time or energy for any activity except to call it a day!! On Saturdays, she trains with Mr. B.N. Sudhakar at Kanteerava Indoor Stadium. On Sundays, Neysa tries to complete all the studies and pending class work, which she has missed due to her participation at the tournaments. She travels a lot as she has been playing all the State and National Raking Tournaments this year.
Neysa is grateful to her badminton coaches, Mr. B.N. Sudhakar, Mr. Irshad Khan and Mr. Prakash Rathod and fitness instructor, Mr. V.R.Beedu without whom she would not have reached this far. She believes that under their guidance and encouragement, she’ll reach greater heights.

To Neysa Cariappa, Bethany High has been her second home, where she likes to take part in all the school activities and to de-stress and chill out with friends before her gruelling sessions (of course, no complains). She’s able to balance her studies as well as sports because of the support, encouragement and motivation from her Principal, Mr. Robert Khin and Director, Mr. Akash Ryall, HOD, Mallika ma’am and all her teachers. All her teachers have been accommodative whenever she has missed school. She is ever grateful to her friends and all her classmates, (in the past years too) who has shared all the class work and helped her cope with studies.

One thought on “Neysa Cariappa – Our Badminton Star”