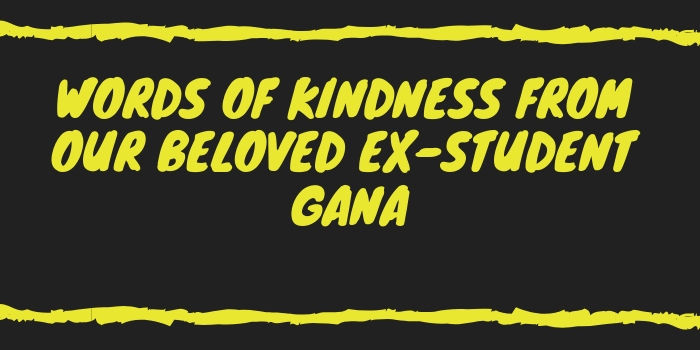 Words Of Kindness From Our Beloved Ex-Student Gana

So to start off my testimonial to Bethany, I was one these reserved and kind of invisible kid at school. I never took part in any of the events in school so obviously everyone thought I was only capable of studying and honestly I thought the same. I still remember one day Saroop sir just heard me talk n pointed out that i had a ” radio voice ” but I did brush it off at that moment.

It was almost months later there was an emcee audition in my college n suddenly I remembered what sir said and decided to give a shot at it. To my surprise I actually did really well and ended up being spot selected to host an intercollegiate fest. It was honestly surreal for me. I was apparently selected for my spontaneity and confidence which are two skills that I developed during drama classes. That year I went on to become the president of the college’s science forum competing with some of the most talented candidates.

I also hosted 3 other fests the following year. Drama elective is not just about acting and theatre but it’s more about exploring your hidden talents. It helps you get rid of your insecurities and stage fright which naturally makes you a more confident personality. I was awarded “BEST FEMALE COMPERER OF THE YEAR” on my graduation which was a really proud moment for me.

Who even thought that the invisible girl from school could go out there and host shows with so much confidence? Drama classes really helped me get in touch with my talents and encouraged me to go out there and grab on to my dreams. If it wasn’t for drama elective I would have probably lived life in a cave full of my insecurities.